The years of WWII and the atrocities of the Nazi and Soviet totalitarian regimes are today labelled as symbols of blood and death. It is no coincidence that local residents used the metaphor “House of Death” to refer to the Nazi and later Soviet prisoner of war camps and the Gulag labour camp founded in the mid 20th century in the village of Macikai in Lithuania. Representatives of various European nations were imprisoned here. This is a unique memorial place attesting to the cruelty and inhuman nature of both Nazi and Soviet atrocities. Many victims of the totalitarian regime died here from the torture they experienced and are buried nearby. Unfortunately,very little is known today about these camps and the people who were imprisoned here.

The project aims:
To preserve a site where totalitarian regimes committed atrocities and murdered peaceful inhabitants of Europe and to immortalise the memory of the victims
To encourage cooperation between the representatives of various nations and generations, to promote mutual understanding about the horrors of totalitarian regimes, and after the preparation of a thematic tourist route to the Macikai camps, to disseminate information about the tragic events that took place here to EU citizens.
To develop the project from the local to the international level, to reach out and build a network of cooperation with local and international organisations.

In order to achieve the aims of the project archaeological and historical research will be carried out on the camps to gather information about the number of victims, their identities, and memories of victims will be collected and published. A website with public access will be developed. Representatives of European and Lithuanian organisations will be invited to a conference, where the collected material will be presented and the research and experiences will be shared. Representatives of various social groups and generations will be involved and invited to a campaign to commemorate the victims. 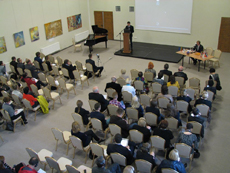