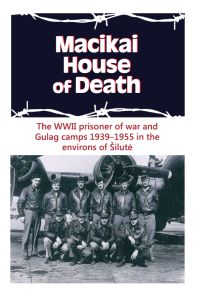 The Genocide and Resistance Research Centre of Lithuania has prepared a project called ‘The House of Death 1939–1955. News of a Resurrected Memory’ commemorating those who were imprisoned or died in the Nazi prisoner of war camp and later the Soviet prisoner of war and Gulag labour camp in Macikai Village of Šilutė County. The project aimed not only to preserve the memory of the victims and the location of the repressions and the massacre of the European population carried out by totalitarian regimes, but also to disseminate information about the tragic events that took place there.

Working together and cooperating with people from different nations and generations, we engaged foreign citizens, public organisations, representatives of various social groups and different generations in the project activities. The following were partners in the project: the municipal administration of Šilutė District, which has experience in organising events and implementing European projects; Šilutė Museum, which researches, exhibits and popularises places of interest in the area; Šilutė Gymnasium, which actively participates in events in Šilutė; Macikai Social Care Home, which for many years has maintained the site of the camps; Šilutė branch of the Association of Poles in Lithuania, which supports the nurturing of historical memory; and the Museum of the Second World War in Gdańsk, which has many years of experience in researching the history of the 20th century and also extensive experience and success in providing and publicising information both throughout Europe and globally. The Institute of Baltic Region History and Archaeology of Klaipėda University, whose staff conducted archaeological research, has also made a significant contribution to the project.

Extensive archival and archaeological research was conducted during the project. This served as the basis for preparing this publication, a tourist route and an information stand about the Nazi and Soviet prisons in Macikai, the living conditions of inmates, and their fate. The final phase of the project was an international scientific conference ‘WWII Prisoners of War in the Nazi and Soviet Prisoners of War Camps 1939–1948’ organised in Šilutė and the Victim Commemoration Campaign. These raised the project to an international level and helped establish contacts, form a cooperation network of local and international organisations, and reach broader audiences in nurturing the memory of the victims of totalitarian regimes. All historical information collected during the project, as well as the conference material will be available on the website www.rememor.eu in Lithuanian and English. This website will be available to the public and will continue to collect historical material such as eyewitness testimonies, photographs, etc.

I would like to take this opportunity to sincerely thank the municipal administration of Šilutė, the other project partners, journalist Stasys Mėlinauskas, archaeologist Egidijus Abromavičius and everyone who shared information or otherwise helped in the implementation of this project. In particular, I thank the authors of the studies published in this book, who are well known researchers of the Nazi and Soviet occupation period: Teresė Birutė Burauskaitė, director general of the Genocide and Resistance Research Centre of Lithuania, Dr Arūnas Bubnys, Dr Vytautas Tininis, Assoc. Prof. Dr Liucija Arūnė Arbušauskaitė and the project coordinator, historian Edita Jankauskienė.

This book is one of the most important parts of the project and an important contribution to the Lithuanian historiography of the Nazi and Soviet occupation period. I hope that the book, which evokes memories of the ‘House of Death’ in Macikai 70 years after WWII, will serve future generations as a testament to the cruelty and inhumanity of both the Nazi and Soviet repressions. I also hope that it will foster the development of a democratic society, increase tolerance and mutual understanding, and enhance the awareness and understanding of citizens about the basic values of today’s European Union – freedom, democracy and respect for human rights.

Daiva Judeikytė, Manager of the project ‘House of Death 1939–1955. News of a Resurrected Memory’